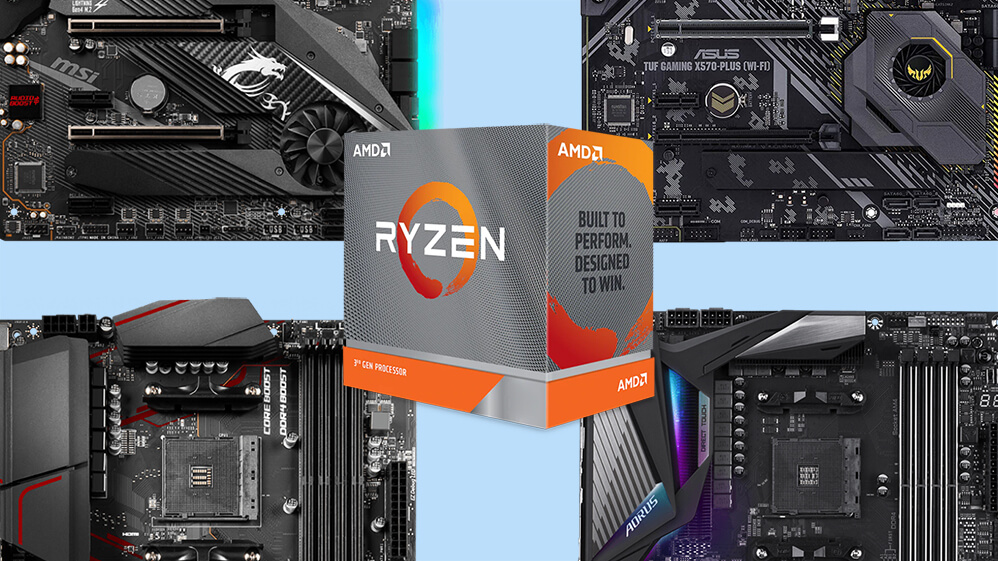 If you are looking for original and unbiased reviews, you are in the right place because we do not exaggerate and trust rumors. The AMD Ryzen 9 3900X is a third-generation Ryzen processor built on the 7-nanometer process featuring PCI-E generation 4. It is a powerful processor, but the fact is that only a compatible motherboard can let you achieve its ultimate results. So it is imperative to choose a Motherboard so that you may enjoy the desired gaming experiences.

Here are some of the Best X570 Motherboard you will find them perfect for Ryzen Processors mentioned below:

Asus ROG Strix X570-F Gaming is one of the technically improved motherboards extremely compatible and supports correctly to the 2nd and 3rd generation AMD Ryzen™ processors. It has many advanced specs and features such as it supports Pie 4. 0, HDMI 2. 0, DisplayPort 1. 2 with the characteristics of dual M. 2 and USB 3. 2 Type-A and Type-C connectors.

Its dual onboard M. 2 heatsinks and a water pump + Header, active PCH heatsink, MOS heatsink with 8mm heat pipe, and many more outstanding components. All these enables it to give you maximum connectivity and high speed and keep it cool even when it is overclocked, which is very important for advanced games.

The Gigabyte X570 AORUS MASTER AM4 ATX Motherboard is manufactured on the AMD X570 chipset that runs with both 2nd and 3rd generation AMD Ryzen processors an AM4 socket. It is equipped with four memory slots supporting up to 128GB of dual-channel DDR4 RAM, which can supports up to 4400 MHz and above along with six SATA III ports and three PCIe 4.0 M.2 slots when it is operated at higher frequencies and voltages which increase heat and power consumption.

There are some other remarkable specifications such as Bluetooth 5.0, Wi-Fi 6 (802.11ax), Intel GbE, Realtek 2.5 GbE, and Realtek ALC1220-VB 7.1-channel HD audio all those enables to make a solid combination with AMD Ryzen Processors for the accompaniment of gaming tasks.

ASUS ROG Crosshair VIII Hero X570 is one of the leading motherboards making the best foundation with AMD Ryzen Processors. It is well-built with the latest technology for computer devices in every aspect of specs and features. It is fully eligible to support the 2nd and 3rd Generation AMD Ryzen CPUs.

Its power and utmost performance of speed and connectivity also based on USB 3.2 Gen2, Two M.2 drivers, and AMD StoreMI for the In some additional spec and features, it has on-board WI-FI 6, Automated system-wide tuning, Pre-mounted I/O shield, ASUS SafeSlot, ASUS-exclusive Aura Sync RGB lighting, and ROG cooling zone including an active PCH heatsink along with M.2 aluminum heatsink and many more to make a dedicated motherboard for gaming heroes.

Asus ROG Strix X570-E Gaming is one powerful motherboard compatible and made to support the 2nd and 3rd generation AMD Ryzen™ processors and Radeon™ Vega Graphics Processors. The eligibility of supporting features powers it dual M. 2 and USB 3. 2 Type-A, PCIe 4. 0, HDMI 2. 0, DisplayPort 1. 2 and Type-C connectors to help it for providing you height leverage of speed and connectivity with an advanced cooling system to keep it as cool as possible during the circumstances of overclocking.

There are some other incredible specs and features, such as ASUS-exclusive Aura Sync RGB lighting, to make it more elegant. It has 5Gbps LAN and Intel Gigabit Ethernet With ASUS LANGuard, Gateway teaming via GameFirst V, and Wi-Fi 6 (802. 11Ax) with MU-MIMO, so all these make it a fantastic device that gives you an entire experience in gaming stimulations.

It is one of the updated motherboards that can undoubtedly make a perfect bond with the Ryzen process to meet the gamers’ requirements. MSI MPG X570 GAMING PLUS supports the 2nd and 3rd generation of Ryzen processors due to the power of MSI’s latest Dragon Center that consolidates all MSI tools like GAME MODE, VOICE BOOST, LIVE UPDATE with an easy-to-use interface.

It is equipped with turbo USB, an advanced operating system that supports Windows® ten 64-bit and 16.8M colors / 29 effects running on one click, including MYSTIC LIGHT EXTENSION that supports both RGB and RAINBOW LED strip which gives you maximum vision. So it can provide you extreme performance without affecting speed and quality for the highest level of gaming thrills.

The MSI MPG X570 GAMING PRO CARBON WIFI AM4 ATX Motherboard is one of the compatible motherboards with AMD Ryzen Processors. It is technically built on upgraded components such as AMD X570 chipset that supports second and third-generation AMD Ryzen processors with an AM4 socket. It is equipped with four memory slots for up to 128GB of dual-channel DDR4 RAM.

In the section of storage capacity, it has six SATA III ports and two M.2 slots. Also, it has two PCIe 4.0 x16 slots for graphics cards, one of which runs x4 mode, and two PCIe 3.0 x1 slots for other PCI-based hardware. In some additional powerful features, it has Realtek ALC1220 7.1-channel HD audio, Bluetooth 5.0, intel I211AT Gigabit Ethernet, Intel AX200 802.11ax WIFI and many more that make it a perfect companion for an AMD Ryzen processor for the satisfaction of passionate gamers.

The ASUS PRIME X570-PRO AM4 ATX Motherboard has developed on the AMD X570 chipset compatible with 2nd and 3rd generation AMD Ryzen processors with an AM4 socket. Due to its four memory slots, it can support up to 4400 MHz while it is overloaded. It is powered by six SATA III ports and two M.2 slots along with three PCIe 4.0 x16 slots for graphics cards.

There are some other coordinated specs. Features are Realtek S1200A 8-channel HD audio and Intel I211-AT Gigabit LAN, multiple temperature sensors to keep it fresh, Durable Capacitors, Premium Audio Capacitors and many more to make it an ideal motherboard for gaming enthusiasm.

For maximum speed and connectivity, you may surely need a smart motherboard. Asus Tuf Gaming x570-Plus (Wi-Fi) is a device that may fulfill the requirements. It is powered by x570 chipset, which is an upgraded version of x470.

Whereas in the other additional benefits, you will get some additional benefits such as a comprehensive cooling system, dual USB 3.2 Gen 2 Type-A/Type-a/Type-c, and PCL 4.0 M, Synchronize LED lighting with a vast portfolio of compatible PC gear. Including transmittable RGB strips, and many other elements to make it more functional and competent for gaming adventures.

GIGABYTE AMD X570 UD motherboard is based on an upgraded technology made to support 2nd and 3rd generation AMD Ryzen™ processors and the processors with Radeon Vega Graphics. GIGABYTE X570 motherboards offer an extensive list of features such as support for PCIe 4.0 interfaces on some select boards, rectified audio, and high speed of Ethernet, to maximize users' performance, audio, and data transfer processes.

The new, advanced power and thermal design enable users to increase their production by supporting a maximum resolution of [email protected] on AMD Ryzen™ 3000-series Processors, making the GIGABYTE X570 motherboards the priority for gamers who want to build the ideal AMD platform gaming setup.

Asus PRIME X570-P is a type of professional motherboard that is highly preferred to build a gaming setup with AMD Ryzen™ Processors. It is an upgraded device among gaming accessories. This motherboard is very suitable for the 2nd and 3rd Gen AMD Ryzen™ processors due to its Supreme elasticity with USB 3.2 Gen 2 ports, PCIe 4.0, and dual M.2.

Besides, it is based on a ProCool design as its jacks use solid pins instead of hollow pins connectors that make it more systematic to enable it for the passage of 12V power directly to the processors. Here are some other remarkable factors: it has a tranquil mood, a handy set up with many other powerful specs and features, making it more reliable for gaming champions.

As you know that there are numerous types of motherboards available in the market, but it is hard to choose a perfect one. But all of the motherboards mentioned above are advanced and compatible to build an ideal setup with AMD Ryzen™ Processors for gaming purposes. They are technically upgraded and improved versions of motherboards capable of supporting the 2nd and 3rd generation of AMD Ryzen™ processors. They are such devices that we hopefully consider that they will never disappoint you, or you will not feel disappointed after buying any of the motherboards. You should carefully check out all the specs and features and reconsider the price before purchasing any product as human error is always expected in the content.

Is the x570 motherboard worth it?

Sure, it is considered a perfect match with AMD Ryzen™ processors. They support 2nd and 3rd generation processors and Radeon™ Vega Graphics Processors. They have advanced cooling systems, lighting, enough storage capacity, and upgraded gaming networks. They have a beautiful and handy interface so that the gamers can facilitate themselves with an easy to use technology, especially Asus TUF GAMING X570-PLUS (WI-FI) is highly worthy. They are available in different designs and power perimeters that one can select according to its priorities and price range. That is why it is ranked high in the market.

As technology is being upgraded and improved day by day in the computer and its devices. So the reality is that x570 motherboards are the latest and upgraded equipment than x470 motherboards. That is why it is better in some way than x470 motherboards, especially with the shift of PCIe 4. In the other differences, the X570 chipset also provides eight USB 3.0 Gen 2 ports with speeds of up to 10 Gbps, and four USB 2.0 ports. Whereas the X470 has only two USB 3.2 Gen2 ports, six USB 3.2 Gen 1 ports, and six USB 2.0 ports, mainly Asus ROG Strix X570-E Gaming is the better one. For a better comparison, you can also check their brief descriptions.

As you know, x570 motherboards are based on advanced technology and fully capable of supporting 2nd and 3rd generation AMD Ryzen™ processors. As AMD Ryzen™ processors have an excellent history for compatibility with old and new technologies as well, that is why we can hopefully say that they can get well on some next upgraded processors, especially MSI MPG X570 GAMING PRO CARBON WIFI. It is a future proof motherboard because x470 and x370 are still compatible in some ways. Many gamers are again using it due to its flexibility for the adjustment with different versions of processors.

Actually, the x570 motherboard is technically based on improved technology and offers high performance, but logically, this is not the reason for its high price. The idea is that every gamer is moving to x570 motherboard that increases its demand in the market. Though x470 and x370 are still working well, the passionate players do not want to compromise on the speed, quality, and connectivity, especially when some x570 motherboards like Asus TUF GAMING X570-PLUS (WI-FI) are still not expensive. So they need to buy devices based on the latest technologies, which makes them valuable.