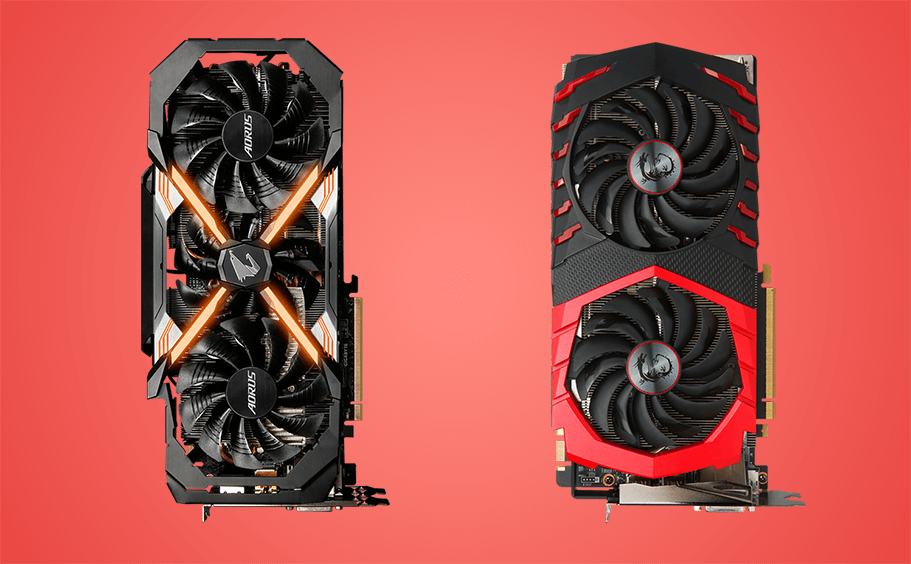 To play brand new AAA games at 4K with the best visuals, you will need a PC that is equipped with a very powerful graphics card, especially; if you want those breathtaking visuals by cranking the graphics settings all the way up. When running the games at 4K resolution, you will have to lower the detail and effects of the game from the settings. So, the graphics card matters a lot and you have to have a 4k graphics card.

We are going to be going through the cheapest 4K graphics cards here in this guide. Before you make your final decision about which graphics card you will be getting, you should compare a few attributes between the graphics cards to make sure that you make the right choice. Here we will go over what you need to look for and how you can choose the best graphics card for you.

The design was a hit when it debuted, and the modern, angular look still looks appealing. Some of the users might notice that there is no DVI port, but don’t worry because the GTX 1080 Ti comes with an adapter that you can plug into a DisplayPort.

By getting rid of the DVI port, more space has been made for a better cooling solution. Now, the second slot is used for ventilation. Now, the whole slot is open for airflow. Nvidia says that their new high airflow thermal solution provides double the amount of airflow area of the GTX 1080’s cooling system.

For a long time, 4K gaming at 60 FPS (Frames Per Second) has been considered as the holy grail of PC gaming, and the Nvidia GeForce GTX 1080 Ti is the closest we got before the Nvidia Turing launched a few years later. Smooth gaming experience in 4K resolution will depend on the game that you are trying to play.

Some of the games might struggle to deliver consistent 60 FPS at 4K resolution while some other games will smoothly run at 60 FPS and 4K resolution. The Nvidia GeForce GTX 1080 Ti will provide you with a smooth gaming experience anyhow.

The Nvidia GeForce GTX 1080 Ti graphics card an excellent choice for gamers if they want to game at 4K resolution.

The MSI Duke GeForce GTX 1080 Ti graphics card has vertically oriented fins that you can see if you look closely at the top or the bottom of the graphics card. It also has GeForce GTX written in white along with the RGB enabled Duke logo on the top of it.

The iCX technology by EVGA is quite interesting for some reasons. It contains a large number of additional sensors onto the graphics card and a protection circuit too. It also features a highly-optimized heatsink and fans to provide the users with far more information about their graphics card and keep them cool as well. Thanks to the RGB lighting and the EVGA’s excellent Precision XOC tuning utility, the EVGA GeForce GTX 1080 Ti Gaming with iCX technology is customizable.

There are 9 additional sensors and a microcontroller unit that is integrated into the PCB on iCX-equipped graphics cards, plus the sensor built-into the GPU, for 10 in total. The high-end graphics cards have been using a single sensor in the graphics card to determine the card’s temperature until now.

On iCX cards, the fans are now controlled asynchronously. It can potentially reduce the noise output. The GPU fan will spin up if the GPU is getting warm. All of the LED lighting on the iCX-branded cards is RGB and is fully customizable, like the other high-end EVGA graphics cards.  Backplate is two pieces, and also has thermal pads to provide better cooling to the components on the backside of the PCB.

The EVGA GeForce GTX 1080 Ti Gaming is an amazing graphics card for the gamers who want to game at 4K resolution.

ASUS release their ASUS GeForce GTX 1080 Ti Turbo graphics card; it is running on the Pascal architecture and features 11 GB GDDR5X memory. It has a huge 11 GB of frame buffer. The advances in the technology have allowed ASUS GPU’s to use the premium alloy components and Auto-Extreme technology that maximizes performance, reduce power loss, improve reliability, and achieve thermal levels that are relatively lower than the competition.

ASUS GeForce GTX 1080 Ti Turbo graphics card also features a customizable backlit logo that you can swap and replace it with your very own custom design. It does let you create a unique looking GPU that also matches your aesthetics perfectly.

The ASUS GeForce GTX 1080 Ti Turbo has a boost clock of 1582 MHz while the base clock is 1480 MHz. The GPU Tweak II enables the quick and easy one-click overclocking, while it still holds the more advanced features for the Pros. There is another option for better gaming performance, and that is the Gaming Booster function, it enables maximum gaming performance by stopping any unwanted processes and reallocating resources.

The ASUS GeForce GTX 1080 Ti Turbo features a dual-ball bearing fan with a “frictionless” design, replacing the standard sleeve bearing. It has removed the need for oil, which can dry out and allows smoother operation and improved efficiency.

The asynchronous compute is the simultaneous execution of both the render requests and the necessary calculations. In APIs like Vulkan or DirectX 12, it is especially relevant in this. It has allowed for faster and more efficient communication between the CPU and the GPU. The ASUS GeForce GTX 1080 Ti Turbo graphics card is an excellent option for enthusiasts who want to have a smooth gaming experience at 4K resolution.

Since Nvidia’s Founders Edition graphics cards do not always appeal to the enthusiasts because of the specifications and the design, companies like Gigabyte feel compelled to bring a little extra to the table. With three 100mm fans, attention-grabbing lighting, and generous use of copper, the Gigabyte AORUS GeForce GTX 1080 Ti Xtreme graphics card is no exception.

The performance of the third-party graphics cards depends on the GPU boost frequency that it can sustain, and thus on power limits, cooling, and processor quality.

The Gigabyte AORUS GeForce GTX 1080 Ti Xtreme graphics card has a mix of some plastics and light metal alloys. There is a backlit Aorus logo and a fan-stop indicator on the top. The cooler’s fins are vertically oriented when you look at it from the top and bottom.

Gigabyte changed the default mode power target to 250W while maintaining the same clock speeds. It did prove to be sufficient; additional headroom was not needed to sustain its desired frequencies.

The Gigabyte AORUS GeForce GTX 1080 Ti Xtreme graphics card is really fast and performs really well in gaming. It is one of the best options for gamers who want to play games at 4K resolution.

Zotac company’s success isn’t only attributed to their mainstream-oriented products, but also the enthusiast-class hardware that they sell. Zotac is trying to attract the hardcore gamers who will spend any amount of money with their Zotac GeForce GTX 1080 Ti AMP Extreme Core graphics card.

Zotac uses plastic mostly for the graphics card’s cover, but it still looks and feels classy.

When you turn the Zotac GeForce GTX 1080 Ti AMP Extreme Core graphics card over in your hands, you will notice that Zotac’s backplate wraps around on the top and back, helping stabilize the frame a bit. Plate’s main purpose is to look pretty; however, it does not help with the cooling.

At the top, you will see a white, printed GeForce GTX label and an RGB-backlit Zotac logo. If you look closely into the top and bottom of the graphics card, you will be able to see that the cooler’s fins are oriented vertically. However, there is no VRM heat sink, which could have helped with cooling, but in its place, the board has extruded aluminum that receives some airflow from the fans above.

The Zotac GeForce GTX 1080 Ti AMP Extreme Core graphics card truly shows the next-generation VR performance while it also has plug-and-play compatibility with leading headsets. Also, this graphics card has pretty much all the power to provide enthusiasts with the performance that is needed to have an amazing gaming experience.

The Zotac GeForce GTX 1080 Ti AMP Extreme Core is an amazing graphics card because of the performance it provides and the design it has. This graphics card is a great option for enthusiasts who want a really nice 4K gaming experience.

6 Important Components To Look When Choosing a 4k GPU

Make sure that you can connect to your monitor right to enjoy gaming experience at 4K resolution. The modern technology is the HDMI 2.0 and the DisplayPort 1.4 that are capable of 4K resolution.

1080p (FHD), 1440p (QHD), an 2160p (UHD / 4K resolution) are the three most popular resolutions nowadays. To choose which resolution is good for your unique situation, it is best to select based on performance and visuals.

What you need and what you want for your gaming experience depends on your budget. It is better to have a bigger budget if you are looking for high quality. You can expect to spend over $1000 to get a quality graphics card like the GTX 1080 Ti, which will be able to run modern games at 4K resolution.

What graphics card can run 4K?

Do I need a special graphics card for 4K?

What graphics card do I need for 4k 60fps?

What is the best budget graphics card 2020?

The best budget graphics card has to be the Zotac GeForce GTX 1080 Ti AMP Extreme Core because of the performance it provides the enthusiasts with. It has one of the highest clock speeds among the graphics cards that are mentioned above, while its price is just over $1000. But, it does support 4K resolution, and its performance is excellent.