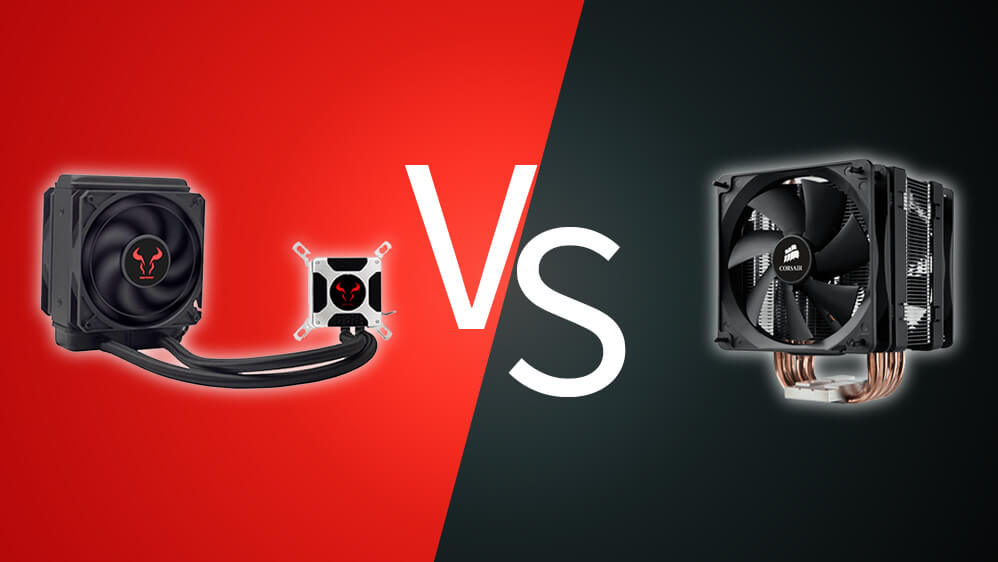 The answer to this question is liquid cooling; if a person has limited airflow and a heavy overclocking plan, then one should go with liquid cooling. For various other purposes, air cooling is more than enough. Comparatively, it is much affordable and easy to handle.

Overclocking has become a trend nowadays, even though it is more popular with GPUs instead of CPUs. Liquid CPU cooling is spreading more day by day. At some point, your mind forces you to think about giving a try to liquid cooling. In the paragraphs below, we will discuss the difference between liquid cooling and air cooling, what are their functions, and in the last, either you should choose liquid or air cooling.

CPU coolers generally have two types; the first one is air cooler, which comes with a vast metal heat sink and a fan inside that throws air away heat from the CPU. And the other one is a liquid cooler, which is the most common and affordable option.

What is Air cooler?

The air cooler has specific functions. It depends on two components. The first one is the fan and the second one is the heat sink. The heat sink is made of high-quality thermo-conductive material. Most probably, a combination of copper and aluminum. Its most important function is to take away heat from the CPU.

Yet, all the heat is already absorbed by the heatsink before it is dispersed. The fan plays its role and continuously circulates the air by its extravagant spinning technique to make the heatsink cool and keep away from being heated.

What is Liquid cooler?

As compared to air coolers, the liquid cooler has complexed more functions and components that include the pump, the radiator, hoses, and the fan. However, the air cooling depends on the air that spread through a heatsink; the liquid cooling system has a similar case, but it utilizes fluid rather than stand. In this system, water or any other coolant must be liquid is forced to pump through the hoses, which are already connected to the part that needs cooling, the CPU.

Although recirculating is not enough, and the liquid coolant needs its heatsink. Now here comes the role of the radiator in the cooling setup. Finally, it also has a fan that prevents the system from overheating and keeps the cold air running.

Which one is better?

There is no doubt about the efficient performance and powerful functions of liquid cooling. It can circulate a high amount of liquid coolant more quickly. However, the most crucial part is that you need high consumption cooling power for your system. Air cooling systems would be sufficient for all the CPUs running at factory level clock speeds. Even if you plan for some casual overclocking, liquid coolant is not needed until you force the CPU to cross its boundaries.

Which one is more budget-friendly?

Whereas liquid cooling is comparatively more organized and systematic; but on the other hand, air cooling has the relief of affordable prices. Their price has a difference in hundreds of dollars, and the reason can be manufactured at lower rates.

But if you have ever deal with the computer hardware, you will hardly find maintaining and installing a cooling setup for the liquid. Besides these, an air cooler is easy to handle and much more convenient. You just have to take it out once in a while to vacuum the dust-out, and here it is like the new one.

There are two situations where we advised liquid cooling: the one is extreme overclocking, and the other one is cramped computer cases. When we force a high-class CPU to cross its boundaries, the best air cooler will knock-out, and when they lose their ability to keep the CPU cool, the last option will be none other than water.

Even if you don’t try to cross that limit and don’t like the sound of a fan continuously rotating, liquid cooling is a much better option.

In the end, if you wish to fix a gaming configuration in a Micro ATX or Mini ITX case, which does not allow the perfect airflow. In that case, liquid cooling would be an ideal match because it does not need much air to keep the CPU temperature low.