MSI has teamed up with EK Water Blocks (EKWB) and has integrated EKWB’s monoblock on the upcoming motherboard by MSI and have created a new variant of the motherboard, the MPG Z490 Carbon EK X motherboard.

There are not many details about the MPG Z490 Carbon EK X motherboard’s monoblock, but it does appear to be from EKWB’s Momentum series. If this monoblock on this motherboard is from the Momentum series then it is probably manufactured from nickel-plated copper with an acrylic top piece with the standard G1/4-inch ports.

The Motherboard has a good design and is aesthetically pleasing, especially because of the carbon-fibre. The monoblock on this motherboard is designed by EKWB to specifically cool both the processor and the motherboard’s power delivery subsystem. The MPG Z490 Carbon EK X motherboard also features addressable D-RGB lighting. 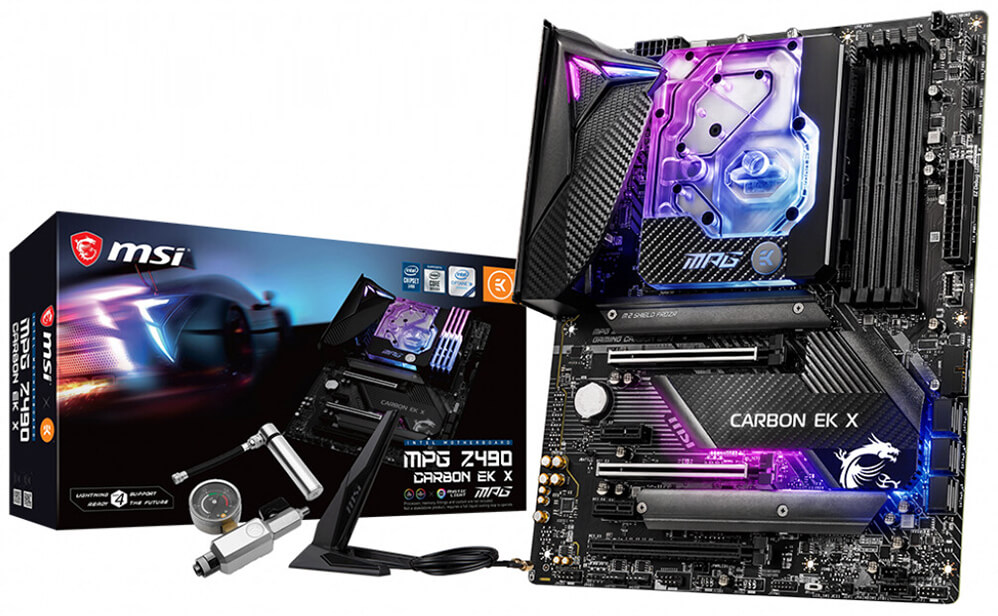 This motherboard is actually the MPG Z490 Gaming Carbon WiFi in disguise. The MSI MPG Z490 Carbon EK X motherboard has an Intel LGA-1200 socket (latest one) along with the Z490 chipset, a set that is designed for the Intel’s 10th generation of processors. This is an ATX Motherboard and is equipped with a 12-phase power delivery subsystem and the motherboard also features a combination of an 8-pin EPS and 4-pin power connectors for the processor.

For the audio, the MPG Z490 Carbon EK X motherboard features the Realtek ALC1200 codec to provide a high-definition 7.1-channel audio experience via the five 3.5mm audio jacks and a single S/PDIF port.